In the fullness of time, Edward and I continue our splendid vagabond ways and years. Why not?  Plenty of reasons why not, of course, starting with infectious diseases, planes and trains, pollution, and a state of worldwide customer service—online and in person—that is akin to fighting city hall.  But, the upside of travel is prodigious, and the surprises can put a smile on one’s face for days and weeks. Building new memories seems a reasonable thing. 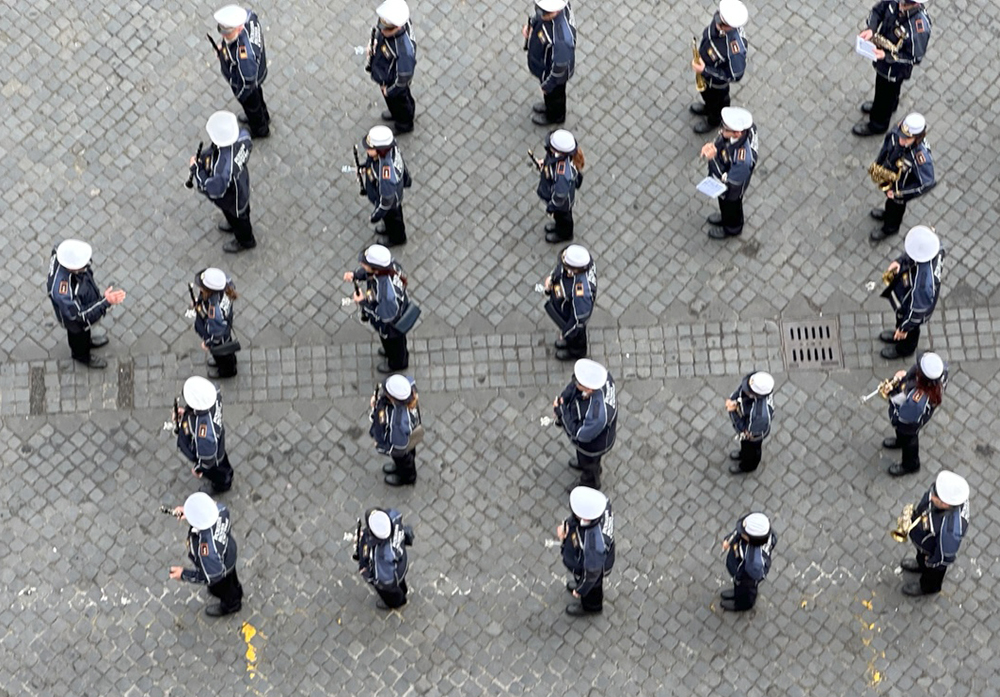 Just a few weeks ago, for instance, I had a surprise close encounter of a personal kind with the Pope. Yes, that Pope, or Papa as he is referred to in Italy and Italian. We were in Rome for a few December weeks—a wonderful time of year and place to visit, with sun and mild temperatures and festivals and rituals, decorations, window shopping, much music, and more.  Who knew that December 8th is a national holiday of sorts in Italy?  The Feast of the Immaculate Conception celebrating Mary, Jesus’s virgin mother.  Of course, the Pope knew.

We were in our rented apartment with its balcony overlooking the Spanish Steps when barricades went up, brigades of police arrived, marching bands passed by, and after lunch crowds began massing. Papa was coming. High atop a column at the base of the Spanish Steps is a bronze statue of Mary that on December 8 is adorned with a wreath and surrounded by flowers. Who knew it was a tradition for the Pope to visit that day and offer a blessing? Thousands and thousands of people did, and the piazza was filled for the Pope’s arrival. Because of Covid, he had not been able to continue the tradition for a few years until this past December. Just before 4 pm, he arrived (not in his Popemobile, but in a security procession with blue flashing lights). He gave his blessing and a short speech carried live on Italian national television. He broke down in tears when he mentioned the war in Ukraine and had to pause to recover his composure. After his speech, he walked to the barriers and spoke to and blessed some people who were up close. Then he sat in his wheelchair and was whisked around the big enclosure blocked off seemingly just for this purpose. (He has a knee problem.) He smiled, he gave that signature Papal wave, he seemed happy to be out and around people. The masses who came to glimpse Papa could experience the moment, but most at street level could not see him. But, of course, from our balcony we had a distinct view of him. What a world… “when we last saw the Pope…” 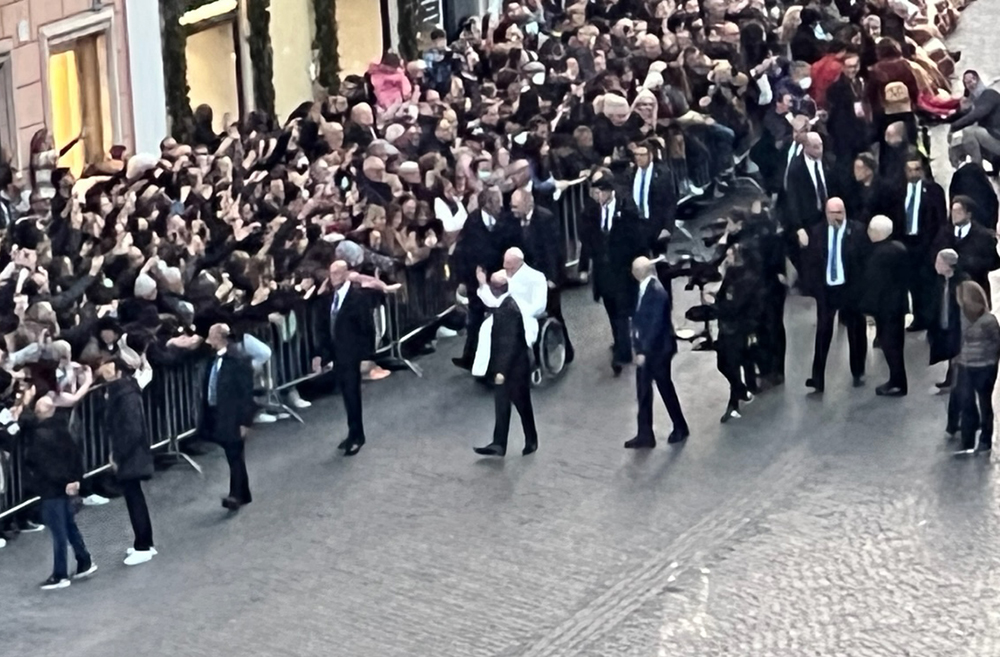 So, there are firsts and there are repeats. As one learns early in life, revisiting a place does not always live up to one’s memory and experience of the past. Things change. One changes. The world is a different place. In the day, some places weren’t so crowded. In Provence, I used to visit the perched villages of Les Baux and Gordes regularly; now I don’t. Too crowded, but I appreciate the democratization of such tourist sites and sights and the value of shared culture. I suppose visiting Times Square on New Year’s Eve is a once-in-a-lifetime experience—at least it will remain so for us. Revisiting Taormina in Sicily this past summer was startling and no doubt the last we’ll visit this legendary hilltop town with is its ancient Greco-Roman theater (still very impressive) and its view of the blue sea and a distant cloud-covered Mount Etna.

Back in the day when we last visited Taormina, it still had the aura of old-world Italy, movie stars, and the utmost elegance. While it has been a tourist destination for centuries, its medieval streets housed locals and rich summer residents. Its hotels and restaurants were simply world class. Strolling down its main street, Corso Umberto I, was a fantasy passeggiata, quite enjoyable. Now it is, shall we say….no, I won’t say.  So many people pack the street, which is lined with the cheapest of cheap eateries (though not cheap) and souvenir shops selling junky souvenirs. Oh well. Okay, we were there in August. Our bad. It wasn’t our prime destination, but we were in the neighborhood and could not resist the temptation to re-experience Taormina’s magic.  We wish we had not. Another lesson in life?

But in the fullness of life, we’ve also learned it is good to continue to make friends and smile a lot. Who could have imagined some of our best friends this past year have been aged currently 1.5 years, 4.5, 7.5 (the .5 is very important), 10, 13, 13, and 13 (a lucky number?). Seriously, we’ve gone to more concerts, ballets, meals in restaurants, especially starred restaurants, and had these young friends individually as house guests many times–more than any other of our friends (in France, NY and even Italy). Once in a while with their parent(s).  Oh, did we mention their first-time visits to Yankee Stadium and Madison Square Garden? What larks. You never know. 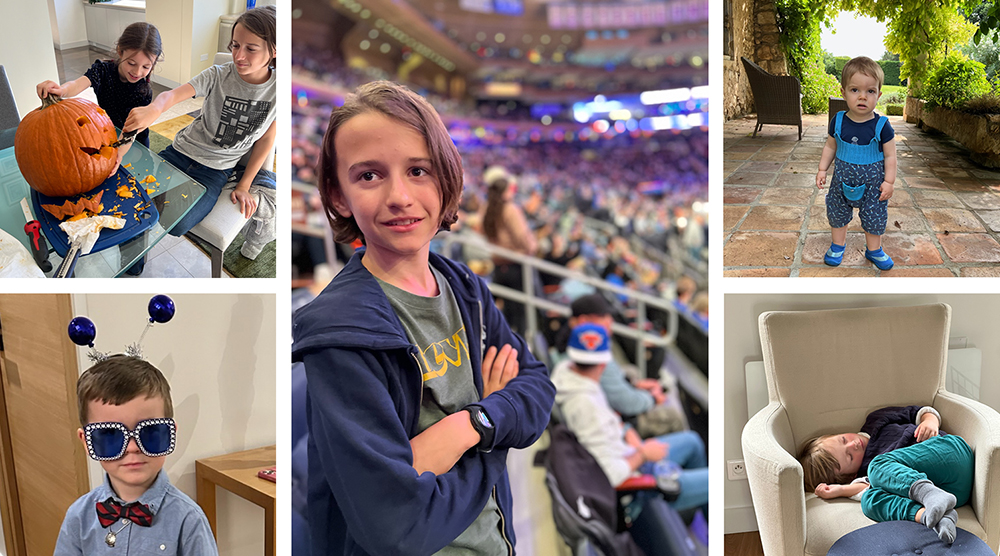 Our vagabond ways took us to more beaches in more places than usual. Was it a May West moment (“too much of a good thing is wonderful”)? Or simply the pull of the sea in such turbulent times?  It wasn’t planned. Hey, it brought us to Sicily in August! But it was wonderful…the Caribbean, bien sûr, the Atlantic, the Mediterranean on several trips, even the English Channel. The memories bring back smiles. 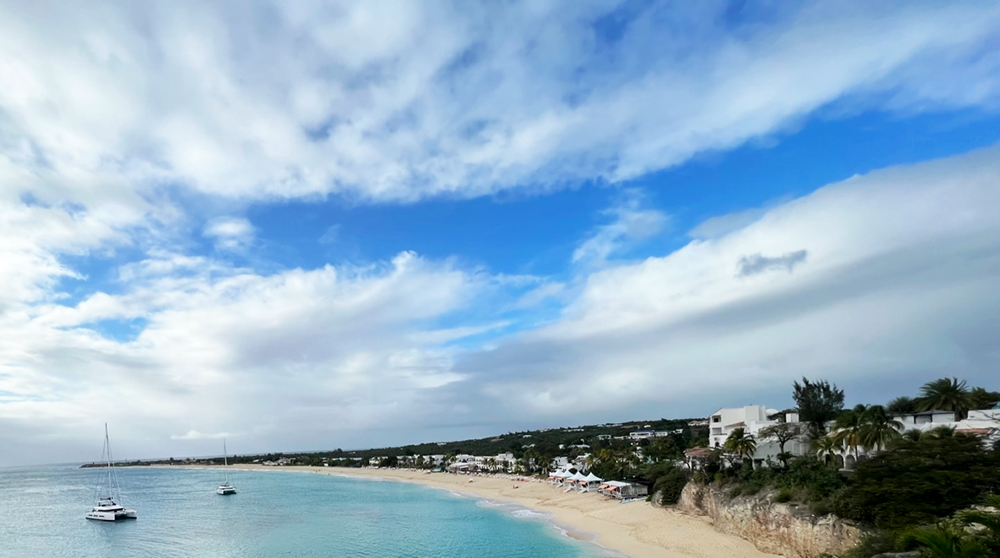 Edward and I hope you have experienced the joys of eating well and perhaps rejoining the restaurant circuit. We don’t measure our time in coffee spoons, but our calendar is often marked by restaurant visits and startling dishes that linger long on our plates and in our minds. I must say a few pastry shops and chocolaterie experiences of the year are equally vivid. Some things never change…at least pour moi.

We wish you a joyful new year.  For us, we already have our travel tickets and reservations for the next six months. You never know.